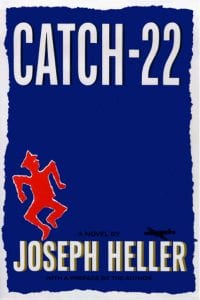 From the very beginning, Catch-22 by Joseph Heller builds a relatively calm world in the surroundings of fictional Captain John Yossarian during World War II. The narration immediately drops you into the story with no exposition to inform you of what’s happening. The development of relationships and the importance of friendship are crucial motifs throughout the books as you realize that Yossarian is attached to the people he becomes involved with. This leads directly to the main problem of the story: how war is perceived versus how war is experienced. Yossarian’s rational outlook on the bleak events of the War are directly in contrast to the insane society he lives in. The modern needs and wants of society are pointed out through the sheer absurdity of what others in the story believe in. Heller helps develop the character of Yossarian by surrounding him with unrealistic supporting characters to effectively criticize the faults of society. All these methods of development seem to point towards an ending of either extreme absurdity or brutal reality as either Yossarian conforms to the outlandish ideas of his peers or his peers see the truth. Either way, the ending will definitely impact you significantly regarding the times of war and how society should behave.

From previous war stories I’ve read, like The Things They Carried, I know that those who have experienced war have significantly changed because of the stress of the war. The glorified propaganda during the war proposed to civilians led them to believe that war was not as dreadful as it seemed; however, soldiers in the war quickly learned the truth of loss and death. Even though so many different books explain the horrors of war, we still send soldiers into the battlefield, knowing that they may be permanently scarred. If these different books are accurate, I believe that this book will explain the problems of glorifying war as well as show the reality of war in a way that is truthful rather than deceitful.

One thought on “Times of War: The Truth…?”